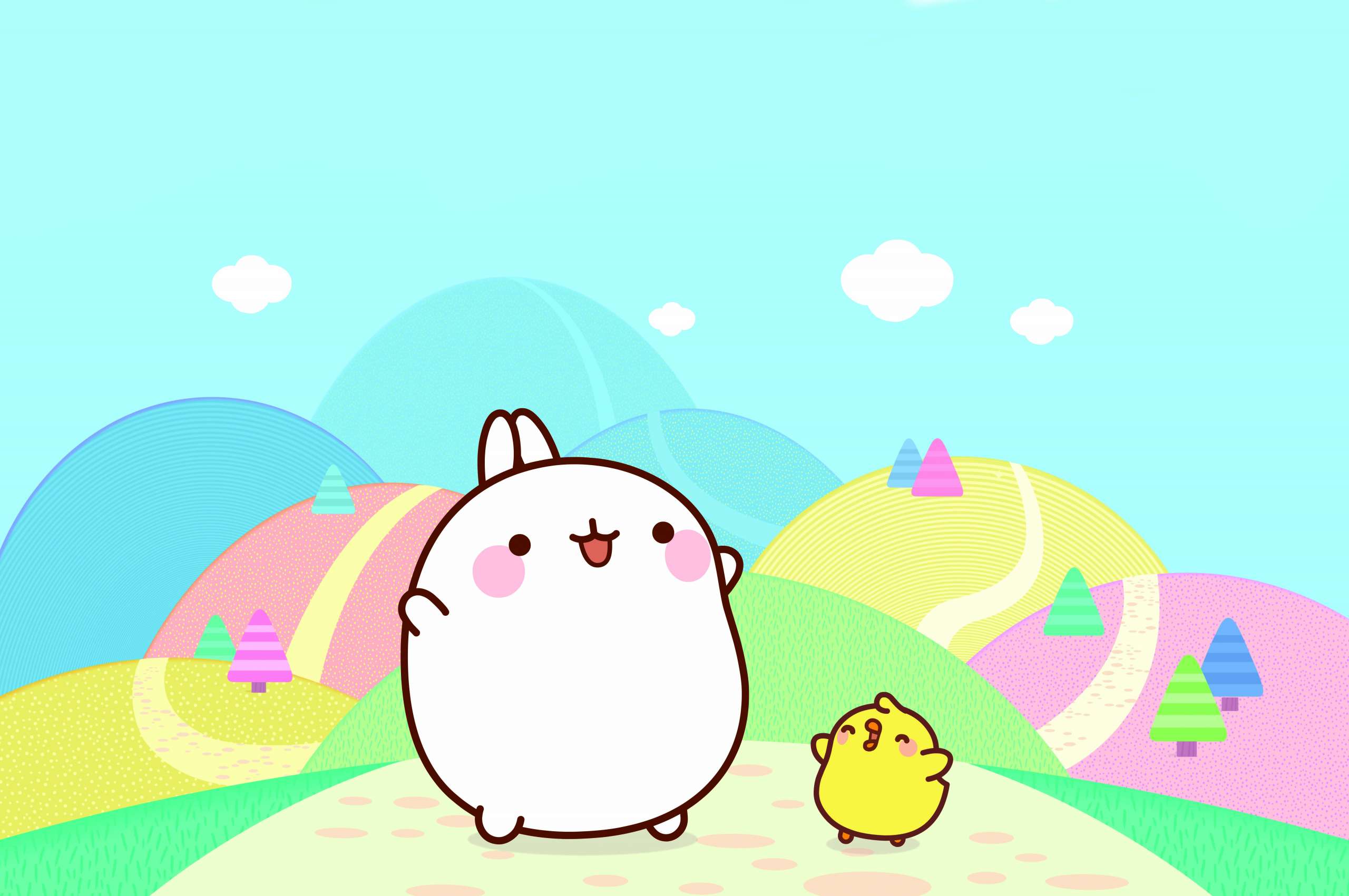 A giggly white rabbit called Molang who loves nothing more than cuddles and helping his friends has become a global children's megastar.

The ever-smiling character began as an emoji in South Korea before the French animation studio Millimages gave him new life as the star of his own quirky kids series four years ago.

It has since become a global sensation not just for pre-school children at which it was first aimed, but also among teenagers and adults who have been swept up in its fluffball of cuteness.

"Molang" now shows in 190 countries including China and has been picked up by both Disney and Netflix.

"Molang is a big round rabbit, who is extremely positive, imaginative and enthusiastic," said Marie-Caroline Villand, who developed the animated character from the emoji created by Hye-Ji Yoon.

Molang and his best friend, a chick called Piu-Piu, are kindergarten Laurel and Hardys, forever getting themselves into a tizz in bite-sized five-minute adventures that always end with a smile.

Piu-Piu is "smaller, a little more nervous and shy," Villand told AFP at the Millimages Paris studio near the picturesque Canal Saint Martin, where some 100 animators work on the series.

She also helped come up with the very particular language that the characters speak, which although utter nonsense is actually quite easy to understand.

Molangese is a mix of French, Italian and Russian with a smattering of gibberish, which means anyone anywhere can understand it without need for dubbing.

"The words are very clearly said and they come back all the time," said Villand, meaning fans quickly get the drift.

"'Bah kah ki kou?' means either 'What is it?' or 'What are you doing?', depending on what is going on on the screen," she said.

"And 'Ko te ta da ki!' means 'I have an idea!'," she added, a key phrase in Molang's problem-solving lexicon.

Drawing the rabbit is "both easy and difficult", chief animator Nicolas Marrocco told AFP in his glass-roofed studio.

"It's easy because they are all just little balls -- but because of their shape some actions are very difficult to do," he added.

"For instance, how do you touch your head when you have such tiny arms?"

(The answer is by cleverly moving the arms around Molang's back.)

Millimages managing director Roch Lener picked up the worldwide rights for Molang in 2014 and the first series aired on France's Canal+ the following year.

But at the time his decision was met with scepticism by many of his peers.

But he believes its global success -- with the audience now heading north of 200 million -- is down to Molang's very clear identity and his strong association with "happiness and friendship".

"When Roch Lener showed up, the character, its potential was obvious, but there was still a lot to do," said Nathalie Leffray, who is head of developing children's programmes at Canal+.

She is convinced that its wide family appeal is based on the way it is written, with lots of clever cultural references.

"It is very modern and the writing means it also speaks to a more grown-up audience," she added.

All of which has won Molang a place at the top table of children's entertainment alongside Peppa Pig, Hello Kitty and the Moomins in record time.

But Lener is clear that the series itself is not where the money is.

"Making cartoons earns you nothing," he said, "but some that are worldwide successes can make considerable sums with toys."

Millimages have high hopes for Molang franchising with hundreds of "super soft" toys of the rabbit and his friends decorating their studio.

Its "My Best Friend" merchandising brand goes from toys to towels.

McDonald's have also adopted the character for their children's menus as have Korean railways for their express trains.

In the meantime, the storylines are getting a little longer in the fourth series, which began screening in November, allowing Molang to get involved in more complex stories and even to travel through time.

In one episode the friends go to the court of "Sonny El Magnifico", a rabbit version of the French "Sun King" Louis XIV who built the Palace of Versailles.